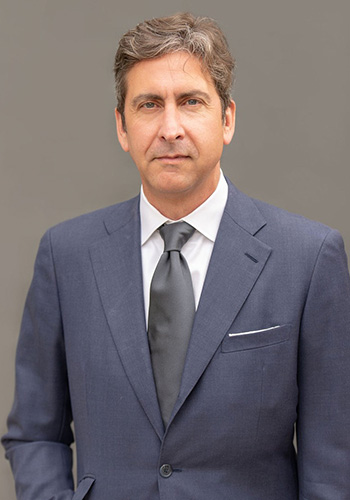 John McCoy is a Partner at Groveman | Hiete LLP and is an experienced trial lawyer and corporate compliance expert with extensive experience both as outside and public company in-house counsel, and as a senior officer with a government enforcement agency. John has successfully represented public entities, businesses and individuals in state and federal court litigation and before administrative agencies and courts of appeal.

While his professional experience spans many areas of substantive law, he has a particularly strong background in general litigation, complex litigation including securities litigation, corporate governance and compliance, environmental superfund issues and insurance coverage and white-collar criminal and regulatory investigations and defense. He has been active in pro bono and public interest work throughout his career and serves on the Board of Directors of Public Counsel, the nation’s largest non-profit law firm.

In 2008 John joined the United States Securities and Exchange Commission’s Los Angeles Regional Office as the head of its trial unit. There, he both supervised and personally litigated federal securities fraud cases involving insider trading, disclosure fraud, Ponzi schemes, Broker-Dealer/Investment Advisor/Auditor misconduct, and violations of the Foreign Corrupt Practices Act (FCPA). He was promoted to Associate Director of Enforcement in 2010, assuming responsibility for supervising the Office’s enforcement efforts. Much of John’s work during this period focused on addressing fraud involving mortgage-backed securities and other collateralized debt obligations that had been at the center of the 2007-08 global financial crisis. His work on these cases led the Los Angeles and San Francisco Daily Journal to declare him one of its “100 Best Lawyers in California”.

After leaving the SEC John took an in-house position at the publicly traded media company News Corporation, which through a series of corporate reorganizations became 21st Century Fox and subsequently Fox Corporation. As the company’s Chief Ethics and Compliance Officer, Senior Vice President, and Deputy General Counsel, he developed and implemented compliance programs for the company’s film and television operations, with a focus on legal risk management, corporate governance, foreign bribery and corruption, antitrust, currency control, and commercial fraud. In that role he drafted FOX’s Standards of Business Conduct and other key global compliance policies, conducted worldwide risk assessments, led trainings on compliance issues, supervised internal investigations, managed litigation conducted by outside counsel, and advised his colleagues on identifying and mitigating regulatory risks in both ongoing operations and potential acquisitions and new ventures.

John left Fox in early 2021 to return to trial and complex litigation work.